Does My Homeowner’s Insurance Cover Hurricane Damage? | Van Cleave Law
PROTECTING YOU
YOUR FAMILY AND YOUR BUSINESS
Learn More 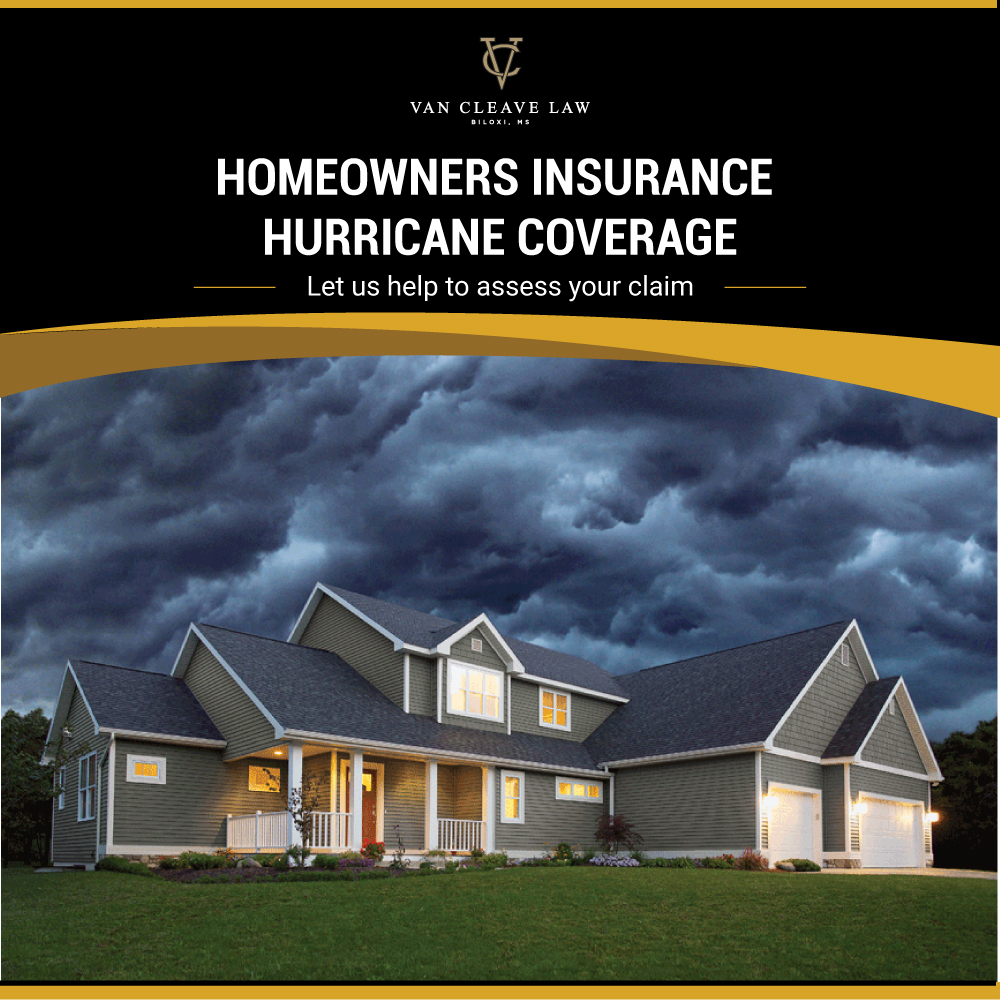 Whatever the cause, it seems that hurricanes and severe tropical storms are hitting Mississippi and other Gulf Coast states more frequently than in the distant past. According to the executive director of the Mississippi Emergency Management Agency, Mississippi “dodged a very big bullet” with regard to Hurricane Sally. Our neighbors in Alabama and the Florida Panhandle were not so lucky. More storms will certainly be on the way, this year and in the coming years. Many of us remember the devastating effects of Hurricane Katrina, and many other storms.

Hurricanes and severe storms are part of life on the Gulf Coast, and many Biloxi homeowners simply assume that our homeowner’s insurance will protect our property from damage caused by the weather. While it is true that certain policies do provide full coverage, insurance companies are in the business of making money and will often try to interpret and apply their policies in the narrowest way possible in order to pay out as little as they can. Fortunately, in many cases, an experienced lawyer can help ensure that your insurance company treats you fairly and honors its commitment.

As a homeowner and a consumer, the best thing you can do to protect your rights and your investment in your home is to arm yourself with knowledge about how homeowner’s and hurricane insurance works. Here are some answers to questions we often hear from people regarding their homeowner’s insurance and severe weather.

How Does Hurricane Insurance Work?

Although all of us who live on or near the coast would like to have insurance coverage for damage caused by Hurricanes, there is actually no such thing as “hurricane insurance”. Typically, hurricanes cause damage to homes because they produce high winds, excessive rain, flooding, and storm surge. Most homeowner’s insurance policies in Mississippi are “all risk” policies that provide coverage for any direct, physical loss that is not excluded under the terms of the policy.  Under “all risk” policies, the insured need only give her insurance company proof of direct physical loss, and the company must then evaluate and pay the claim – or prove that the damage was caused by a risk expressly excluded under the policy. Understanding and interpreting the exclusions and how they may apply to hurricane damage is where policies can get tricky.

Most all risk policies do not exclude, and thus provide coverage for, damages caused by wind and rain. However, since Hurricane Katrina, some policies do exclude damages caused by windstorm and/or named storms, and many have separate deductibles that apply to storm damage. Additionally, most standard homeowner’s policies in Mississippi exclude damage caused by “flood”. For these reasons, if homeowners want to insure themselves from damage caused by hurricanes, we often need to purchase a combination of homeowner’s insurance and flood insurance – and in some cases, an additional policy providing windstorm insurance.

When a hurricane or other windstorm hits, it can be difficult to juggle various claims with the different policies that might apply. It is very common for homeowners to have to file multiple claims with multiple insurers, depending on the type of damage your property sustained. This is the right time to seek help from an experienced hurricane insurance lawyer who can assess the different types of damage and the available coverage, and advise you on the appropriate claims.

For example, if your home sustained water damage, you need to determine whether it was caused by rain or water leaking from above, or from rising floodwaters. Your homeowner’s insurance should cover water damage coming in from leaks and rain, though you will likely need a separate claim if you also have water damage from rising floods. Even here there are exceptions, as you may have coverage if rising flood waters caused sewage pipes to back up. The situation can be complicated, and legal help can ensure you cover all your bases, and seek full and fair compensation for your hurricane or windstorm damage.

Is Storm Damage Covered By Insurance?

Importantly, after the devastation wrought by Hurricane Katrina in 2005, insurers made significant changes to windstorm and flood policies in several states, including Mississippi.  To limit their potential liability in well-developed coastal areas, insurers in these states have imposed percentage deductibles instead of fixed-dollar deductibles. These deductibles are often referred to as “hurricane deductibles,” as they typically come into play when dealing with claims related to hurricane damage.

Under a traditional deductible, the homeowner must pay a fixed amount before his or her insurance policy kicks in. For example, if your deductible is $1,000, that is how much you need to pay for damage out of your own pocket before your insurance company covers your other losses. With a percentage deductible, you pay a percentage of the insured value of your home, and the percentage paid is typically between 2 and 5 percent. For instance, if you have insured your home for $300,000, and you have a 5 percent deductible, you would need to pay the first $15,000 of your claim out of your own pocket.

As discussed above, “hurricane insurance” as such does not exist.. However, if you live in a coastal area designated as “high risk” for hurricanes and storm surge or flooding events, and have a mortgage on your home, your lender may require you to maintain flood insurance. FEMA designates high-risk areas, which include parts of Florida, Mississippi, North Carolina, South Carolina, Georgia, Virginia, California, and Louisiana, among other states.

Homeowners who might be required to purchase flood coverage, include:

Even if your lender does not require it, it is a good idea to carry FEMA flood insurance if you are near a flood zone.

Do You Need a  Lawyer to Help with Your Hurricane Insurance Claim?

Insurance companies are supposed to be there for us when we need them the most; having insurance is supposed to buy “peace of mind”. Unfortunately, the reality is that insurance companies make money by collecting premiums every month and paying out as little as possibly in claims. For this reason, when forced to make an insurance claim based on hurricane or storm damage it’s a good idea to speak to an attorney about your case. If the insurance company is accepting liability and is willing to pay out, your lawyer may not need to get involved. On the other hand, if the insurance company is giving you the runaround, your lawyer may engage in negotiations on your behalf or even take your insurer to court.  At a minimum, it is a good idea to set up a free consultation with a Mississippi Hurricane Lawyer to make sure you fully understand your rights.

If your home sustained damage in a hurricane, tropical storm, tornado, windstorm, flood, or another severe weather event, it’s a good idea to speak to a lawyer as soon as you can.  Christopher C. Van Cleave has recovered tens of millions of dollars on behalf of clients who suffered hurricane or windstorm damages and knows how to get insurance companies to pay up. To schedule a free case evaluation with an attorney experienced in handling insurance disputes, call Van Cleave Law today at (228) 432-7826 or request a Free Consultation here

Van Cleave Law
4.9
Based on 8 reviews